KIBIT can reproduce the "tacit knowledge" possessed by experts and people with good intuition, without relying solely on keywords in text analysis.By using a unique machine learning algorithm that sets it apart from conventional text mining and search techniques, it is possible to analyze in a short time with a small amount of computational resources and a small amount of teacher data.In addition, it is highly evaluated for its high natural language processing technology and practical results, such as the ability to capture similarities and contexts in different expressions and extract the features of sentences.

KIBIT was born in the legal tech field

FRONTEO has developed an artificial intelligence engine called "KIBIT" in the uncompromising task of finding evidence in international proceedings.Finding evidence in a proceeding requires finding evidence from a large amount of textual data in a limited amount of time."KIBIT", which has been cultivated and developed in such legal business, learns "tacit knowledge" such as expert experience and intuition, and realizes prediction of future behavior from analysis of human thoughts.

High-speed, high-precision, short-term implementation is possible with a small amount of teacher data (from dozens of cases)

KIBIT implements Weight Refinement, a unique algorithm that optimizes the importance of words. Weight Refinement makes it possible to capture the characteristics of data that cannot be captured only by calculation based on the amount of transmitted information, and even with a small amount of data, sufficient performance can be achieved, and learning can be performed without building a large-scale server environment. It has the feature.

The current KIBIT is "artificial intelligence" that operates by being incorporated into FRONTEO applications, but next-generation KIBIT will evolve into an "KIBIT platform" that operates autonomously in response to external requests, independent of the application. It is said.We are also conducting research that enables analysis of non-linguistic data with a multimodal mechanism that simultaneously processes multiple types of different data such as text, images, and voice.Furthermore, we are also advancing the concept of creating an autonomously distributed artificial intelligence that allows artificial intelligence to communicate with each other in an autonomously decentralized manner and proceed with processing, and the analysis range will expand automatically at high speed.

The integrated platform that supports these complex mechanisms will be the future "KIBIT platform" that autonomously processes big data and obtains advanced comprehensive judgments. 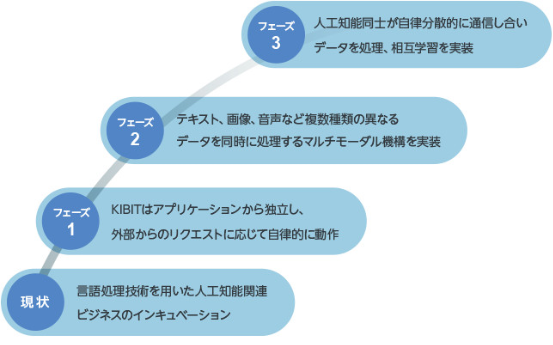 The future brought by KIBIT

Currently, artificial intelligence is generally introduced by a data scientist or machine learning engineer who builds a system at the time of introduction, and the cost at the time of introduction is high, so there is a problem that not everyone can easily use artificial intelligence. ..
With the KIBIT platform currently under development, anyone can easily use the know-how possessed by individual data scientists and machine learning engineers, so that the benefits of KIBIT can be delivered to more people in a shorter period of time. Will be.

If KIBIT evolves in the future and the next-generation "KIBIT platform" is created, it will be possible to perform more sophisticated and convenient analysis through modality other than language and mutual learning between artificial intelligences.Please look forward to the next generation of KIBIT that will lead the new future.