FRONTEO has been conducting research for the development of this device jointly with Keio University School of Medicine since 2015, and has signed a license agreement for exclusive development and sales rights in 2020.1)..With this agreement, the environment for FRONTEO to develop business related to this device overseas has been improved.

According to a report by the International Association for Alzheimer's Disease, the number of patients with Alzheimer's disease worldwide is estimated to increase by about 2050 million from 2020 to about 9,358 million in 1.2), It can be said that measures against dementia are important issues not only in Japan but also in the world. 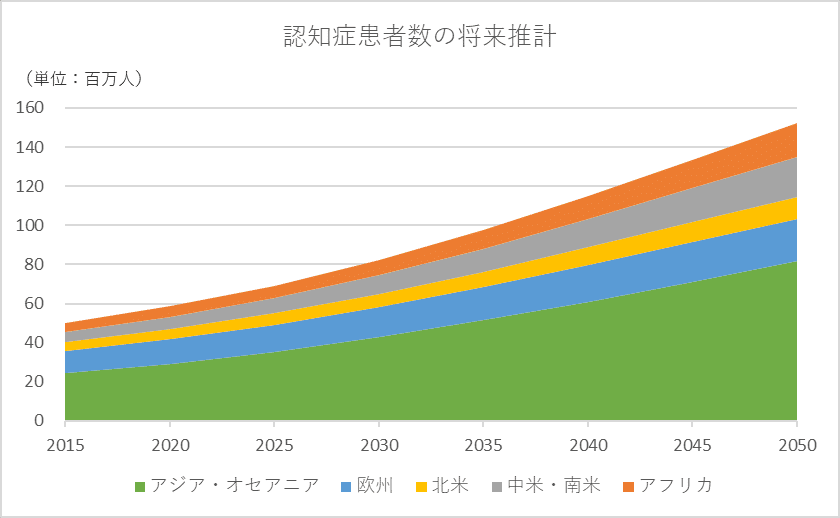 FRONTEO started clinical trials of the "Conversational Dementia Diagnosis Support AI Program" in April 2021 and is currently working to obtain manufacturing and marketing approval in Japan.This device analyzes natural conversation data to screen for cognitive dysfunction. FRONTEO believes that this device will contribute to the realization of early diagnosis of dementia and the reduction of the burden on medical staff and patients involved in diagnosis.In addition, we presume that there will be needs in other countries where the aging of the population is advancing in the future, and we are making preparations to expand this device overseas, starting with sales in Japan.

FRONTEO will work on the development of this device as an AI medical device originating in Japan with the aim of early commercialization and early market penetration in the medical field so that it can contribute to measures against dementia in the world.

■ About conversational dementia diagnosis support AI program
URL: https://lifescience.fronteo.com/aidevice/dementia/
The conversational dementia diagnosis support AI program uses FRONTEO's original natural language analysis AI "Concept Encoder (trademark: concept encoder, reading: concept encoder)" for daily conversation between the patient and the doctor for about 5 to 10 minutes. It is an AI medical device that can screen for cognitive dysfunction. FRONTEO believes that this device can contribute to the progress of digital medical care such as telemedicine and the efficiency and standardization of medical care, in addition to measures against dementia, which is an important issue in Japan, which is facing a super-aging society. I am. FRONTEO entered into a business alliance agreement with Kyowa Pharmaceutical Industry Co., Ltd., which aims to become a CNS (central nervous system) total solution company, in June 2020, aiming for early commercialization and early market penetration in the medical field.Patent registration number: Patent No. 6

■ About FRONTEO URL:https://www.fronteo.com/
FRONTEO uses the in-house developed AI engine "KIBIT" and "concept encoder" specializing in natural language processing to extract meaningful and important information from a huge amount of text data to support corporate business. A data analysis company. Since its establishment in August 2003, it has been expanding globally to Japan, the United States, South Korea, and Taiwan, focusing on legal tech businesses such as "e-discovery (electronic discovery)" and "digital forensic investigation" that support international litigation of companies. Has been deployed.Based on the AI ​​technology cultivated in the legal tech business, we expanded the business field to the life science field, business intelligence field, and economic security from 8, and by using AI to "turn text data into knowledge" , Drug discovery support, dementia diagnosis support, financial / human resources / sales support, etc., contributing to solving various corporate issues. Listed on TSE Mothers on June 2014, 2007. January 6 Obtained a first-class medical device manufacturing and sales license (permit number: 26B2021X1).The capital is 13 thousand yen (as of March 1, 10350).